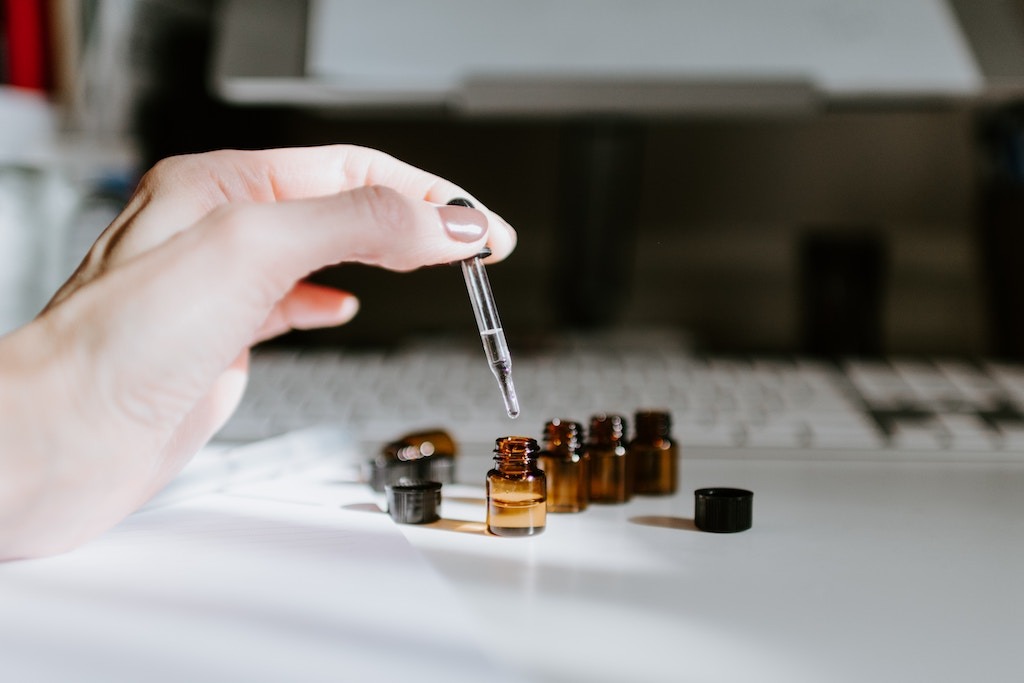 There’s far more to CBD oil than just, well, CBD. As you might expect from its name, each and every type of CBD oil comes mixed into a carrier oil — a type of plant-based oil that’s used as a carrier for cannabidiol (CBD) and other active ingredients derived from the hemp plant.

CBD oil manufacturers use a variety of different carrier oils for their products, including several high quality oils similar to those you might find in your local grocery or health foods shop.

While many of these oils serve no purpose except to carry the CBD, others offer their own range of health benefits and advantages, potentially making them more desirable as carrier oils for any CBD product.

Below, we’ve listed all of the most common carrier oils used for CBD oil, as well as our thoughts on which oils offer the biggest advantages for you as a CBD user.

MCT oil, a type of oil that’s extracted from coconut oil, is one of the most popular oil choices for products containing CBD.

Most CBD enthusiasts consider MCT oil to be the highest quality carrier oil available for CBD oil and other CBD products. This is because MCT oil offers a unique range of benefits both specific to CBD and for your health and wellbeing as a whole.

Before we get into the specific benefits of MCT oil as a carrier oil for CBD, let’s look at how MCT oil is made.

The vast majority of MCT oil sold today is extracted from coconut oil. The “MCT” in the name is a reference to the presence of medium-chain triglycerides — a form of fat that’s easily digested and broken down by the body.  As a carrier oil for CBD, MCT oil offers a range of advantages.

First, because MCT oil is easily absorbed by the body, CBD products that use this oil often have greater bioavailability than those than use other oils. This means that a higher percentage of the CBD content may be absorbed into your bloodstream, resulting in stronger effects.

Second, MCT oil has mild appetite-suppressing and weight loss benefits. In a 2014 study, it was found that MCT oil is linked to increased production of the peptides YY and leptin, both of which are associated with improved satiety and a reduction in appetite.

Although MCT oil is rich in calories like all oils, there’s some evidence to show that it could help to stimulate the metabolism and increase your caloric expenditure.

Finally, there’s also some evidence that MCT oil may help to manage conditions such as autism, epilepsy and alzheimer’s disease, potentially complementing the numerous cognitive effects of cannabidiol and other cannabinoids.

MCT oil is typically used in high-end CBD products. For example, CBDfx’s range of oil tinctures all use MCT oil as a carrier oil. Other CBD products, such as this Intense MCT CBD Oil Tincture by Somnio CBD, also contain MCT oil.

In general, MCT oil’s range of benefits make it worth looking for, although you’ll generally need to pay a slight premium for this carrier oil over others.

Affordable and packed with health benefits, sunflower oil is also commonly used as a carrier oil for CBD. As you’d expect from its name, sunflower oil is produced from sunflower seeds, which are pressed to excrete the plant’s oil.

While sunflower oil’s benefits don’t quite match those of MCT oil, it offers a range of advantages that make it worth considering.

In a 2013 study, researchers found that sunflower oil improved the level of skin hydration when applied by volunteers directly to the skin. For this reason, it’s a common carrier oil for CBD skin balms and lotions, such as this CBD balm from CBDfx and this moisturiser from Somnio CBD.

Sunflower oil is also linked to reduced levels of skin irritation, making it a good choice of carrier oil if you’re prone to skin rashes and discomfort.

Hemp seed oil, also commonly known as “hemp oil”, is one of the most common carrier oils for CBD products. Part of this may be due to its origins — as its name suggests, this oil is made by pressing the seeds of the hemp plant to release a natural oil.

In its natural state, hemp seed oil has a slightly green color, as well as a mild nutty taste that’s distinct from other plant-based oils.

Because of its skin benefits, hemp seed oil is a common ingredient in topical CBD products. It’s one of several oils used in this CBD moisturiser from Somnio CBD. It’s also the main carrier oil for this CBD spray produced by Mari Pharm.

First, like several other common carrier oils, it’s rich in omega-6 fatty acids. More than 70% of the fat content of grapeseed oil is made up of heart-healthy polyunsaturated fats, resulting in a heart-friendly reputation that it very much deserves.

Second, there’s some evidence that grapeseed oil may have antioxidant properties that allow it to protect the skin. However, research into these benefits is still in its early stages, meaning we can’t yet draw any conclusions.

Overall, grapeseed oil is a healthy, effective carrier oil for CBD. You can find it in products such as this CBD balm from CBDfx, where it’s used alongside several other oils, as well as this CBD salve from Blue Moon Hemp.

Another widely used carrier oil, avocado oil offers a range of unique advantages. Similar to MCT oil, avocado oil is highly bioavailable, meaning that your body can quickly and easily absorb the CBD content of the oil and deliver its effects.

Avocado oil is also linked to a range of health benefits, including benefits for heart health due to its oleic acid content, reductions in cholesterol and improvements in some skin conditions, such as psoriasis.

Widely used in salads and as a cooking oil, olive oil has been a favourite of health enthusiasts for years due to its excellent ratio of unsaturated to saturated fats. Today, it’s also occasionally used as a carrier oil for certain CBD products.

Like many other carrier oils, olive oil offers a range of health benefits. Studies show that it may help to reduce the risk of stroke. There’s also a comprehensive range of evidence showing that an olive oil-focused diet can reduce blood pressure and protect against heart disease.

Another popular carrier oil, pomegranate seed oil is packed with antioxidants that make it one of the best carrier oils for CBD tinctures, capsules and topical products alike.

Like MCT oil and avocado oil, pomegranate seed oil is a heart-healthy oil that’s also linked to a range of potential improvements in digestive health. There’s also some evidence that it may be able to improve cognition — something that may complement the effects of cannabidiol.

Finally, there’s even some evidence that pomegranate seed oil may help to prevent the growth and proliferation of cancer cells. However, this research is still in its early stages, meaning we can’t yet draw any firm conclusions about pomegranate seed oil’s potential to fight disease.

Of These Carrier Oils, Which is the Best?

All in all, there’s no “best” carrier oil for CBD. Each oil offers its own range of benefits, from fast absorption to anti-inflammatory, cardioprotective, dermal or even cognitive effects.

When you’re comparing CBD products, make sure to check the ingredients list to see which oil is used as a carrier. Depending on the type of oil that’s best for you, you may want to tailor your search for CBD products to find those that best suit your needs and preferences.